Raising awareness of healthier, happier lives has been firmly placed on a Flintshire school’s curriculum thanks to a project led by Wrexham Maelor Hospital’s Fall Prevention team.

This is the first time a school in Wales has placed ageing well key messages, including bone health, sensory awareness, mental wellbeing, physical activity/exercise and nutritional optimisation as an integral part of the formal school curriculum across all age groups.

In 2019 the Falls Prevention Team and Ysgol Owen Jones in Northop developed the transformational project ‘The Future of our Health Campaign’, which has been inspired from the Welsh Governments ‘A Healthier Wales: Our Plan for Health and Social Care’.

The project brought together children, teachers, parents, grandparents and emphasised the importance of connecting with communities to help spread messages about positive health and well-being.

“Protecting our older population is often reactive but by increasing knowledge and understanding to the benefits of ageing well amongst our younger population aims to raise awareness and empowers them towards thinking about their physical and mental wellbeing at the earliest opportunity.”

During the six month project the children covered many phased topics around exercise and nutrition, with a comprehensive look at the Eatwell Guide and what they should be including in their diet to have healthy bones and maintain good strength and function. 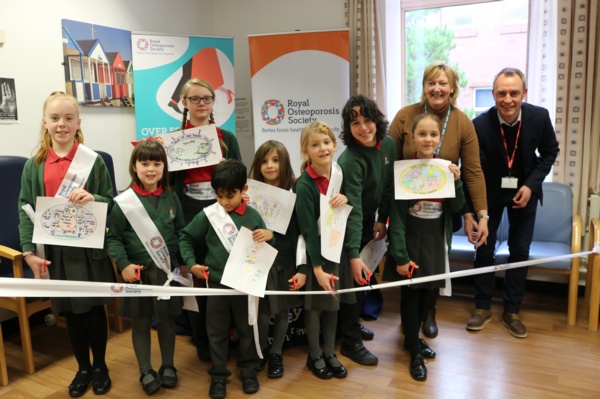 They also learnt about the bone structure and explored the impact of having a broken bone, especially as a fall related fracture can lead to loss of independence, confidence and social isolation. Evidence from the Royal Osteoporosis Society suggests that 1 in 2 women and 1 in 5 men will break a bone after the age of 50, mainly due to poor bone health. Helping the children to understand healthy living for strong bones can help to invest in the long term plan of building healthier, happier lives. The children from each class have also been appointed as health ambassadors to share these evidence based leaflets within their little suitcases which are continuing to be sent home for parents to read.

Headteacher Gareth Caughter said the campaign has had a tremendous impact on the school.

He said: “The pupils now have a much better understanding of how important it is to lead active and healthy lifestyles. The children engaged with their parents and grandparents in a range of ways, which has had a positive impact on their wellbeing also.

“The campaign linked perfectly with the New National Curriculum for Wales and aided us in developing the ‘Mantle of the Expert’ approach where the children become experts and solve real life problems.

“The level of engagement and motivation throughout the project was clear to see in the work the children produced and when carrying out their ‘expert’ roles and the end of the campaign.

“The whole project was a huge success and we are all so proud of what our pupils and staff members achieved.”