Betsi Cadwaldr’s Covid booster roll-out is continuing unabated despite vandalism at one of its vaccination centres on Wednesday night.

The OpTIC Centre in St Asaph was welcoming appointees for their jabs from 8.30am on Thursday morning, despite 17 windows being smashed.

While scene of crimes officers continued collecting forensic evidence after the incident, volunteers and vaccinators had already set up, ready to continue protecting the population.

Teleri Roberts, nurse manager of the Covid vaccination programme at the OpTIC Centre, said: “The service is carrying on as normal despite the inappropriate actions – and that is putting things mildly - of a certain individual.

“We’ve risked assessed the entrance and exit of appointees, to manage people’s safety while in the building.

“We would encourage people to stick to their time slot and honour their appointments arranged but be advised this is not a drop-in clinic.

“The staff here have done a magnificent job. We will continue to make sure the population is protected and can access their Covid vaccinations as safely and as quickly as possible.” 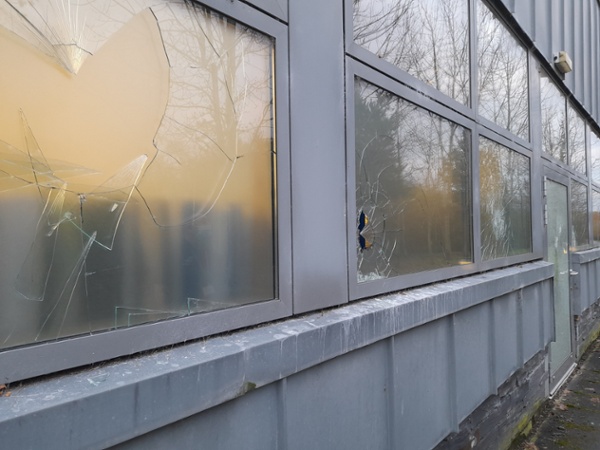 BCUHB was the first health board in Wales to launch online bookings for the vaccine booster jab and is also sending texts and letters to people informing them of their appointments. It is important if people have an appointment they honour it.

If anyone does not yet have an appointment, is over 18 years of age and it has been at least three months since their second Covid vaccination, a booster jab can be booked here: COVID-19 online booking - Betsi Cadwaladr University Health Board (nhs.wales)

Police confirmed a man had been arrested after the attack on the OpTIC Centre.

A spokesman for North Wales Police said: “We received a call at 11.41pm last night (Wednesday) reporting an ongoing incident at the OpTIC building on Ffordd William Morgan, St Asaph.

“Officers attended and a 58 year old man from Llanddulas was arrested on suspicion of Criminal Damage. He remains in custody, and our enquiries are ongoing.”