A woman who received a hospital audiology department’s 500th cochlear implant said she felt like she’d been plunged “into a video game” when it was activated.

Nicole Milton, 47, underwent an operation to have the auditory implant fitted on April 21 at Glan Clwyd Hospital.

The big switch-on came on Tuesday, May 17, and Nicole, whose hearing had gradually deteriorated since childhood, was almost overwhelmed by the sound.

She said: “It was like, at the switch of a button, I had been put into a video game. It was only in the car going home it became bearable.

“By the time I got home it was just weird – I could never remember hearing so good. I’ve got a memory of most sounds but that part of my brain had been lying dormant for years.”

The unit at Glan Clwyd Hospital is contracted to fit the implants and monitor the progress of patients across Merseyside, West Cheshire and Mid Wales - in addition to serving the North Walian population.

Nicole, the 500th patient to take advantage of the life-changing service, had been born with hearing loss but managed to “sail through” school without her friends realising - because of her excellent lip reading skills. 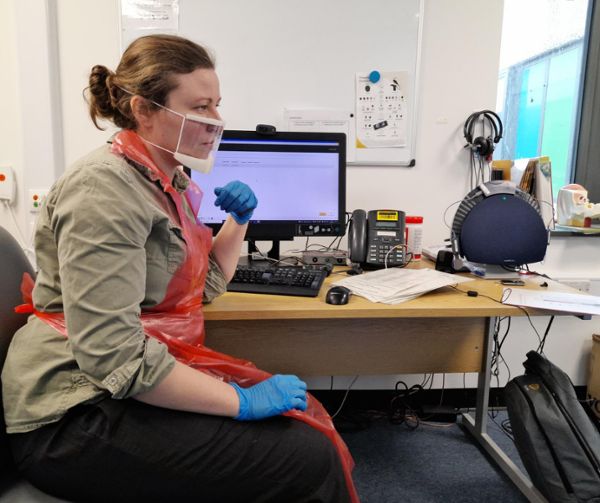 Shanelle Canavan runs through some tests during Nicole's appointment

However, as she entered adulthood, her hearing deteriorated and she was fitted with her first hearing aid when she was 26. By the time she was 36 things reached a stage where she stopped using the telephone.

She explained: “Voices became quite muffled so I gave it up. That’s something I have really missed.”

Shanelle Canavan, a clinical scientist within the audiology service, revealed making such a decision shows hearing loss has reached a critical point.

She said: “Not being able to hear conversations on the phone is a good indication people need a cochlear implant.

“Prior to switch-on Nicole couldn’t hear anything at all without lip reading. We hope she will not have to rely on lip reading but it’s early days.”

Those early signs since she received the implant have been positive, save for the appearance of a well-known cartoon character.

“I could hear things around the house, like the steam from the iron in another room,” said Nicole. “It all sounded so loud.

“We were watching the golf on TV and I could hear the sound of the club hitting the ball. I had never heard that before.

“The clock in the kitchen has to go. I had to focus on it to hear it at first but now it’s a nuisance. Now I just want to know when Donald Duck will pack his bags and go.”

Shanelle explained how speech can sound a bit like the comedy character when the volume is turned up, as the brain gets used to processing the new information.

She said: “Everything will sound quite loud (at first) but you will start to filter out the sounds and you will hear more speech as time goes on.”

A cochlear implant has two parts, an internal implant and an external processor. The internal implant is fitted surgically with tiny wires fed into the cochlea (hearing organ), which then passes electrical current to the hearing centre of the brain via the auditory nerve. This bypasses the non-functioning parts of the ear.

Those electrical impulses reproduce the missing sensations of sound and the brain learns how to interpret them into everyday noises and speech.

One of the ingenious aspects of the external processor, which is attached to the implant via a  magnet, is it can receive telephone speech streamed directly to it from an app on a patient’s smartphone.

The processor can be programmed with various settings such as automatically reducing background noise, to focus on speech and less on continuous sounds. Another setting can be added to help the wearer hear music more clearly. 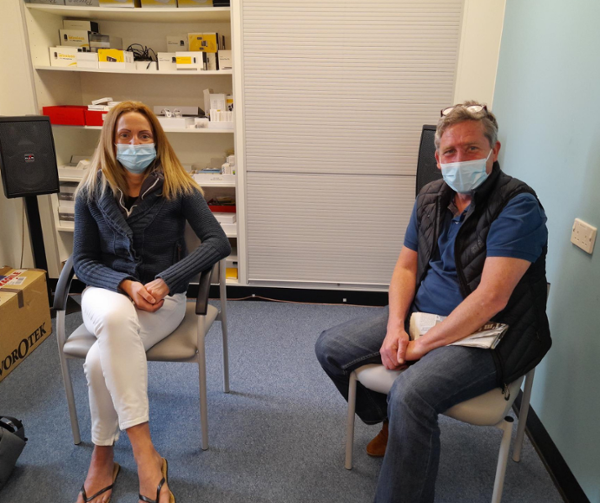 Music was something Nicole’s fiancé Steve Garner said they had lost for the last couple of years, as Nicole found it interfered with her hearing more and more.

With a laugh and a flicker in her eyes, Nicole said: “You watch, I’ll be going for singing lessons soon.”

Speaking about the impact the implant has had on her life, just a week after it was fitted, she said: “My anxiety has disappeared. I don’t butt in on conversations any more. I never knew when to speak and I would shy away from group conversations.

“Normally I would stand back and let Steve do the talking.”

Nicole will still need to come and see Shanelle and her colleagues for a while longer as they find the right levels for her device, tailored to her.

After helping their 500th patient via the procedure, the audiology team is justifiably proud of the difference it makes to people’s lives.

Nicole agrees it has been a life changing experience. She said: “The difference now is amazing.”

To find out more about our audiology service, visit: Audiology - Betsi Cadwaladr University Health Board (nhs.wales)