A father of three who is the first person to leave Wrexham Maelor Hospital after needing intensive care treatment for COVID-19 has praised staff for saving his life.

The Packing Operator who works at the Kellogg’s Factory in Wrexham was admitted to hospital three days later and within a couple of days was placed on a ventilator within the Critical Care Unit.

His wife of 21 years, Alison, has described the harrowing days of not being able to be at the bedside of her husband.

She said: “When I was told by the doctors that David had received a positive test for COVID-19 I was devastated.

“It was very frightening to be told he needed a ventilator, those nine days of not being able to see or speak to him was the worst part for me and the girls.

“Although it was a very tough time for us as a family the staff on the unit were fantastic in keeping us informed and the day I got the call to say he was awake was such a relief!

“The staff, even though I knew they were incredibly busy, went above and beyond and set up a facetime for us so we could see David and make sure he was ok – to have that visual contact was so important for us.”

David, who is a member of the award-winning Fron Choir, left hospital to a round of applause from the intensive care staff just over three weeks later on Tuesday, 21 April.

He is now recovering at home with Alison and their three daughters, Kellen, Nia and Sian. 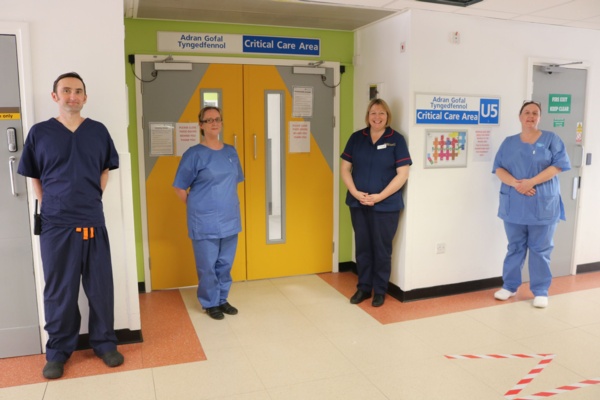 He said: “I can never thank the staff enough for what they have done for me, they saved my life and kept our family together.

“Nothing was too much trouble for them, they always had a smile on their face and even though I didn’t have my own family with me they made me feel like I was part of theirs.

“My family and I have had incredible support from so many people, including my employer and also my sister in law Gaynor, who also works at the Maelor.

“I feel incredibly lucky to be here and it’s all down to those exceptional healthcare staff at the hospital, I will never be able to repay them.”

She said: “It was a really special moment for us to see David leave our Critical Care Unit and we are so pleased to hear he is doing well.

“David and his family’s kind words mean a lot to us and we wish David all the best in his continued recovery at home.”