A self-employed roller shutter fitter who feared he wouldn’t be able to work again after badly injuring his hand, has praised the team at Ysbyty Gwynedd for the excellent care he recieved.

Earlier this year, Jack Moody was at work when a steel pole collapsed and landed on his hand causing a critical injury.

The 25-year-old, from Colwyn Bay, was rushed to Ysbyty Gwynedd Emergency Department where he was told he needed urgent surgery on his hand.

He said: “Everything happened so quickly, I just remember feeling in a lot of pain and there was a lot of blood.

“My hand had split from the middle of my palm and up to the base of my thumb. I did think at this point that I was going to lose my hand.

“I am self-employed, and my job involves heavy lifting so I was really worried I wouldn’t be able to work again.” 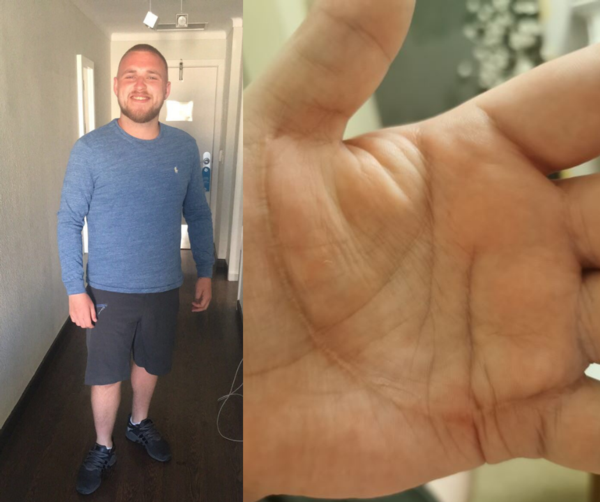 She said: “Following an operation all of our patients require some form of therapy to help them regain their independence and also get back into work.

“We see a variety of injuries within our service, some are life changing and in Jack’s case he suffered a serious injury that required a lot of input from therapy.

“He was very determined and it took a number of weeks before we started to make progress, as at first we thought he might need another operation.

“However, Jack worked really hard with his hand exercises and we hit a turning point and saw real progress.

“It was brilliant to see his progress, it is very much down to how the patient engages with the treatment, and Jack was very engaged throughout and his determination has really paid off.”

Mr Jesudason was also thrilled with Jack’s progress and for his commitment to the therapy programme.

He said: “Jack suffered severe damage to his flexor tendons which run from the forearm through to the wrist and across the palm of the hand, which prevented him from bending his fingers.

“Surgery was done to repair the damage but the key to a successful recovery is the hand therapy that follows.

“He had a very serious hand injury, so to see this amount of progress is fantastic for Jack and for us as a team.

“Jack fully engaged with the rigorous hand therapy programme, I am very proud of the whole hand therapy team, they work tirelessly to get the best out of every hand injury I see and operation I perform.

“We are now looking to expand our therapy team and recruit more hand therapists so we can offer more within this fantastic service.”

Jack has now returned to work following his therapy, he added: “I am really grateful to the team at Ysbyty Gwynedd, the care I’ve had has been fantastic.

“I want to say a huge thank you to the team for everything they have done for me – they are amazing.”