The mother of a 13-year-old boy who almost drowned at sea has thanked the emergency services for saving her sons life.

Rian Lewis Bradburn was amongst a group of four people who needed hospital treatment after getting into difficulty whilst swimming at sea in Aberdyfi on Sunday, 26 July.

HM Coastguard sent Aberdyfi and Borth Coastguard Rescue Teams, Aberdyfi RNLI lifeboat and the rescue helicopter from Caernarfon to assist the Welsh Ambulance Service and two air ambulances to save those in trouble at sea.

Rian was unconscious when he was pulled from the water and was resuscitated by a member of the rescue team before being flown to Ysbyty Gwynedd’s Emergency Department.

His mother, Sarah Lewis, said she would be forever grateful to those who came to her son’s rescue.

“Rian had gone on a trip with his dad to Aberdyfi and was playing on the beach when he went into the sea for a swim.

“He doesn’t really remember much but he was with a few other people and they were jumping over the waves.

“All of a sudden he was pulled under by the ripe tide and couldn’t swim back to the surface.

“It doesn’t bare thinking about what would have happened if it hadn’t been for the quick actions of the emergency services that day, I can’t thank them enough for saving my son,” she said. 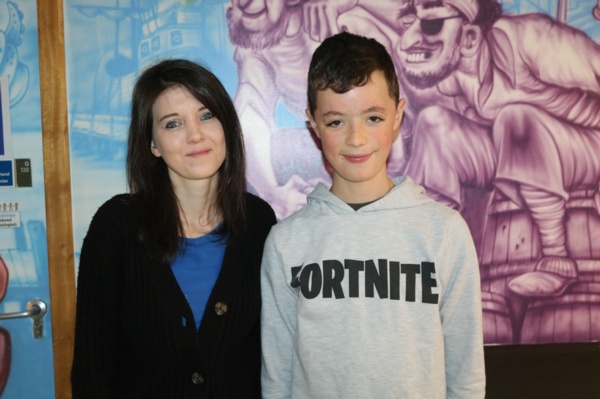 Rian has been recovering from the incident at Ysbyty Gwynedd’s Children’s Ward over the last few days and is now well enough to return home to Shrewsbury.

Sarah added: “We are really grateful to the staff on the Children’s Ward, they have been fantastic with us and have provided great care for Rian during his time with them.

“We feel very lucky that Rian is still with us, it could have turned out so differently.

“I really want what has happened to highlight the dangers of the sea; I don’t want this to happen to anyone else.

“Even though it may seem like a nice sunny day there are still dangers when you go into the sea and I hope what has happened will raise more awareness around this,” added Sarah.

Lee Crumpler, Area Commander with Her Majesty’s Coastguard in Mid and West Wales, said: “This was a multi-agency response to a serious incident in Gwynedd, in which the Coastguard, the RNLI and our emergency services partners had to work together, side-by-side, quickly and efficiently, to pull those in trouble from the water and provide life-saving first aid.

“This incident is yet another reminder of the dangers of being get caught out by the sea and in this case a rip current. Please take extra care this summer when visiting the beach and coastal areas. As ever, if you get into trouble or see someone else in trouble in the sea or at the coast, call 999 and ask for the Coastguard."

Jo Douglas, Clinical Services Manager for Paediatrics and Neonatal at Ysbyty Gwynedd, added: “We are really pleased to see Rian has recovered and is now on his way home.

“This will have been an extremely traumatic experience for both Rian and his family and we wish him all the best in his recovery.”