A Flintshire mum who feared she would end up dead because of an addiction to painkillers has hailed the impact of a ‘life changing’ new treatment.

Nicola Mellor, 30, spent three years in the grip of a codeine addiction that saw her take as many as 32 tablets every day, before getting clean, thanks to the new drug, Buvidal.

The mum of three, from Holywell, is one of 61 people across North Wales who have been offered the drug, with a wider rollout planned over the next few months.

Buvidal is the first new drug in a decade to tackle addiction to opiates and the first to act as a long-acting slow-release medication. It is administered as a weekly or monthly injection into the tissue between the skin and the muscle and helps service users remain abstinent by reducing the negative effects of withdrawal. Its introduction means that people addicted to opiates no longer need to attend the pharmacy on a daily basis.

The North Wales Area Planning Board has commissioned Betsi Cadwaladr University Health Board’s Substance Misuse Services to provide the drug, with funding from the Welsh Government. 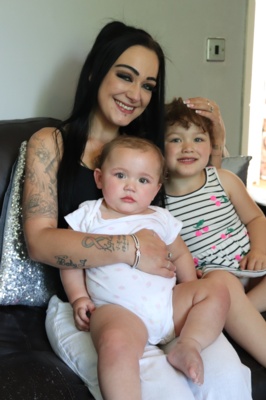 Having never taken drugs before, Nicola first began taking dihydrocodeine tablets in 2017, in an attempt to deal with the emotional pain of becoming estranged from her daughter.

Her addiction quickly spiralled out of control and she finally reached out for support from health professionals after becoming pregnant with her third child, Madison, in January 2019.

She said: “Buvidal has saved my life. I thought I would be dead by the time I was 35 because of the amount of paracetamol I was taking.

“If I didn't have any tablets I couldn't get up in the morning. I was shaking - I was rattling and sweating on the bed. It was really bad.

“I could still look after my kids but I wasn't there emotionally for them. We didn't laugh and I had turned into a zombie mum.

“The substance misuse team told me about Buvidal and I was so sceptical thinking it’s not going to work.

“From the first injection I've not had any cravings or anything and I’ve not taken anything. I haven’t needed it.

“My daughter Ava, whose 3, suffered quite a bit with my addiction.  She has seen a big difference in the last few months. We have a much more loving relationship now.”

The introduction of Buvidal means that people addicted to opiates do not need to attend the pharmacy on a daily basis and are instead administered the injection weekly or monthly by their substance misuse team.

This enables them to focus on their recovery and promotes a return to daily activities such as work or training. During the recent pandemic this has also helped in promoting social distancing.

Nicola said: “It's really nice to know I've only got to go once a month. You don't need to think about plucking up the courage to go and queue on a daily basis.

“Before I'd have to take the kids with me to the chemist every day - come rain or sunshine.

“I’m on this dose for six months then it will be lowered and lowered and when I feel ready and it’s safe to do so I'll go on to a very minimal dose. It's going to be a long process but it’s amazing and I love it.”

“Initial feedback from service users who have been prescribed Buvidal has been very positive. We currently have 61 service users commenced on the drug and based on initial estimates this could rise to around 200.

“We are currently undertaking a programme of staff training and working with pharmacies across North Wales to ensure the effective streamlining of prescribing, collecting and administration of the drug.

“While there are clear benefits to Buvidal when delivered alongside medical, social and psychological support for opiate dependence, it should not be seen as a panacea and we remain committed to delivering alternative treatment options.”