A woman who almost died from flu last winter is urging people to get vaccinated against the illness.

Following her admission she was placed in isolation on Gogarth Ward in Ysbyty Gwynedd for four days whilst receiving antibiotics.

“It was on New Year’s Eve I started to feel very unwell and I was struggling to breathe.

“I went to the Emergency Department thinking there was something seriously wrong with me, I had a fever and I really felt like I was going to die.

“I had swabs done which came back positive for flu and I was immediately put into isolation.

“It was a really worrying time as my consultant told me my sepsis score was really high which meant my life was in serious danger,” she said. 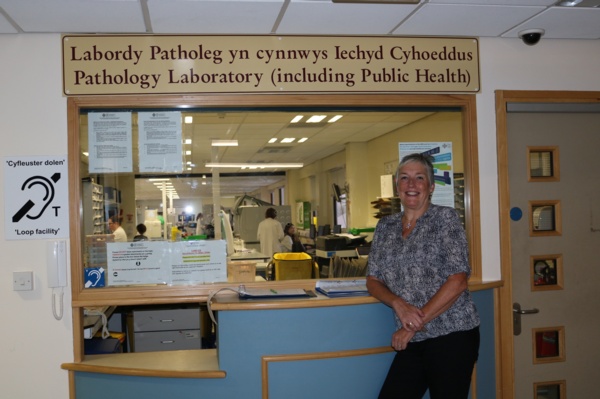 Avril, a Consultant Clinical Biochemist at Ysbyty Gwynedd, left hospital towards the end of January but remained off work for a further three weeks to recover from the illness.

“During my time in hospital my husband became unwell and he was also diagnosed with flu.

“Neither of us had ever considered the flu jab before as we didn’t think it worked as there are so many different types of flu strains.

“What happened to me has made me re-consider and this year is the first time I have had my flu jab.

“It is up to the individual whether they have the flu jab or not but I do tell people who are considering not having it what happened to me.

“I think it’s incredibly important for those who are at risk to have the flu jab and also NHS staff to protect themselves as well as their patients,” she added.

Flu (also known as influenza) can be deadly and the best form of protection for yourself, your family and friends is to get vaccinated.

Some people are at increased risk of developing serious complications from flu and eligible for a free vaccination, and you can get more information about this from your local surgery or pharmacy.

If you are in any of the following risk groups, you are entitled to a free flu jab:

You can find out more information about the flu vaccination by visiting https://phw.nhs.wales/services-and-teams/beat-flu/