A simple idea developed by a nursing sister is keeping families in the loop about relatives’ care and saving valuable clinical time for staff.

Staff on the elderly care ward at Ysbyty Glan Clwyd (Ward 2) have been conducting the trial, where they make proactive daily phone calls to a patient’s nominated family member.

Ward sister Annette Mason came up with the idea after the ward for over 75s moved from the more open Ward 19, to one where they couldn’t always hear calls coming in.

She said it was hard to hear the phones from all parts of the ward, as up to 100 a calls a day came in, meaning family members were becoming frustrated.

Also several relatives of a patient could be trying to get updates on their condition at different times of the day, meaning staff were constantly having to “don and doff” protective clothing and interrupt their clinical work.

Annette said: “We started a trial where we ring one nominated relative for each patient after 2pm every day. We then ask them to relay messages about their loved one’s condition to other family members and friends.

“This would be someone nominated by the patient, or the family if it wasn’t applicable. 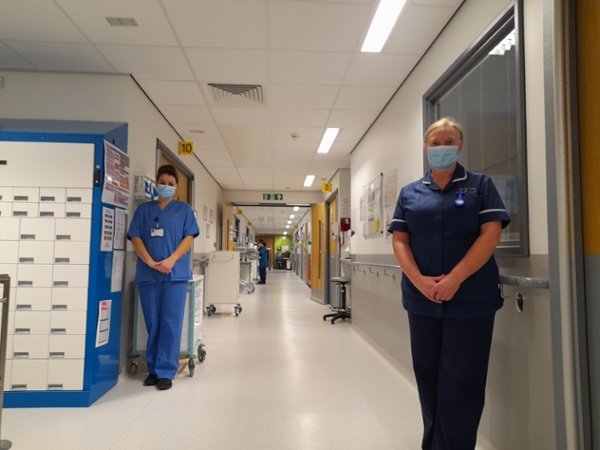 “We recorded the conversations briefly on a form and it worked well. We developed some standard terms of practice, so the calls were consistent and we encouraged students to make some of the calls, so they could get experience of dealing with relatives.”

Students can only answer queries appropriate for their grade but any issues can be noted on the form.

“The staff have taken to it and our nursing students found it useful too,” said Annette. “We also encourage medical staff and doctors to make those calls when there are more serious clinical issues to discuss.”

She added: “It is difficult for families and they understandably want to know about their loved ones. Some are fine with a quick two-minute phone call and others need more detail, so it can take up to 15 minutes on occasions - but become customary practice for us now.

“The family can answer questions about their relative, such as how mobile they are and what capabilities they normally have, which helps us devise care plans.

“They have loved it and there has been really positive feedback. It also allows us to pass messages on to families from their relative.

“It’s an extra job but it’s an important one – it’s about finding space in the day, but it actually saves us valuable time and has changed the relationship between us and our patients’.”

Interim director of nursing at Ysbyty Glan Clwyd, Charlotte Hall, said: “We are in really unusual times with most visiting stopped, so thinking about how we interact with families is massively important for them and us.

“What Annette and her team have shown is a real commitment to their patients and their families, which has also borne dividends in better information and more time to devote to their clinical work.

“We’re looking at whether this should be rolled out across all departments and I’d like to congratulate Annette and her team on Ward 2.”