A young mum whose rare condition can cause her lung to collapse with no warning has thanked the team of clinical staff who helped her have a successful pregnancy.

Donna Marie Parry, from Penysarn in Anglesey, suffered her first pneumothorax (collapsed lung) when she was only 17-years-old and went on to have multiple admissions over the next thirteen years.

It was when Donna fell pregnant in May 2020 it was discovered she had Birt-Hogg-Dubé Syndrome (BHD Syndrome). This rare disorder, which has been reported in around 600 families worldwide, affects the skin and lungs and increases the risk of certain types of tumors. Due to her condition her pregnancy was overseen by Dr Aparna Gumma, Maternal Medicine Specialist Consultant at Ysbyty Gwynedd.

She said: “It was during the start of COVID I found out I was pregnant so staying at home worked well for me as I was already deemed high-risk but even more high-risk due to the virus.

“Due to my condition I still needed to keep in contact with my clinical team as I had to be closely monitored throughout my pregnancy to make sure I was ok.

“My caesarean was all booked in for the start of January so I felt I could relax and I hadn’t suffered with pneumothorax during this time so I felt pretty confident everything was going to go well.

“I was also under the care of the Respiratory team the whole time, they were fantastic.”

However, a week before Donna’s planned caesarean she was rushed into Ysbyty Gwynedd’s Emergency Department after suffering a spontaneous pneumothorax.

The multi-disciplinary team, that includes Consultants, Anaesthetists and Midwives, who had already planned Donna’s birth in January were forced to act quickly to carry out an emergency caesarean due to her condition.

Dr Gumma, said: “Normally when we have a patient with a rare condition such as Donna’s we would transfer them to a specialist hospital who will manage their pregnancy.

“However, in this instance there were no reported cases in the world with this condition in pregnancy so we worked together as a multidisciplinary team to manage her pregnancy here with us at Ysbyty Gwynedd.

“We had arranged a planned caesarean in January but when Donna came into our Emergency Department we knew due to her condition that we had to change our plans and bring the caesarean forward to ensure both mother and baby were safe.”

Thanks to the team, Donna gave birth to a healthy baby girl on New Year’s Eve, Erin Lois Jones who is now almost two-years old. 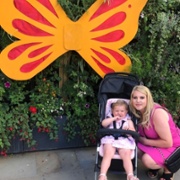 Donna said: “I am so grateful to all the team at Ysbyty Gwynedd for the way they looked after both of us during the pregnancy.

“My condition was also something they had never dealt with before but they really helped put me at ease and made me feel safe.

“I had no complications with my birth and Erin is doing great, I just want to thank the team for what they did for us.”

Dr Gumma added: “We are so pleased to hear Donna and Erin are doing well.

“This really was a huge effort by all the teams together with Donna – our main priority was to keep mother and baby safe throughout and I’m very proud of everyone who was involved.”

This case was selected for presentation at the Royal College of Obstetricians & Gynaecologists World Congress in 2021 and published in their journal.