A father who donated his kidney to save his young daughter’s life is urging all families to talk about organ donation.

Gareth Charlton, from Dyffryn Ardudwy, provided the gift of his life to his daughter, Jennie, in February 2019.

Jennie, was diagnosed with renal failure shortly before her 18th birthday in February 2017.

The 20-year-old was on dialysis for two years but a kidney donor could not be found for her and she had to put her A-level studies at college in Pwllheli on hold for two years.

Both Gareth and his wife Helen were tested for compatibility to see if they were able to donate their kidney to their daughter. 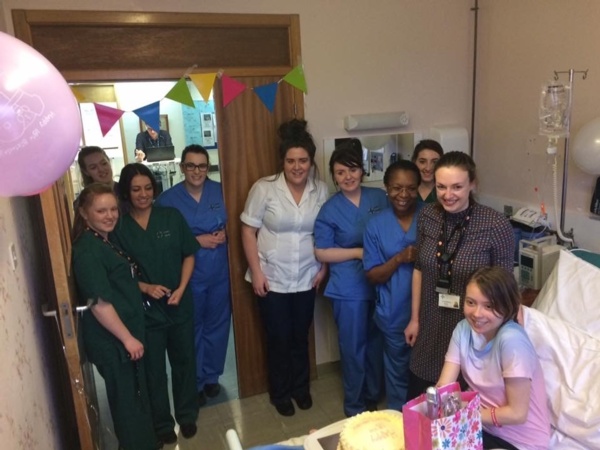 “Jennie spent around a month in Hebog Ward at Ysbyty Gwynedd. She spent her 18th birthday on the ward and the staff went out of their way to get her a cake and decorate her room – they were so lovely.

“After leaving hospital she was on dialysis at home at first and then went to Ysbyty Gwynedd and Ysbyty Alltwen’s renal units.

“Myself and my wife Helen were determined to do anything we could to help Jennie and when we were both tested it was established I was the better match.

“The surgery was carried out in Liverpool in February last year which was a success and has now completely transformed her life,” Gareth said.

The family have been moved by the support they have received from hospital staff and also Ysbyty Gwynedd’s Kidney Patients Association, and now Gareth is planning to do a sponsored walk to raise awareness and funds for the charity.

He added: “I’m hoping to raise funds for Ysbyty Gwynedd’s Kidney Patients Association, as well as raising awareness of the need for organ donors, the importance of discussing your wishes with your loved ones and also raising awareness of altruistic donation, where a person donates to a stranger.

“We are really grateful to everyone who has cared and supported us over the last few years.

“The staff on Hebog Ward, the renal units at Ysbyty Gwynedd and Alltwen, home dialysis team, transplant coordinators and organisers were all outstanding.

“These people are true heroes and every day come into work going above and beyond. I can’t fault them and we owe it to them that we still have our daughter.”