Members of the management team overseeing Ysbyty Enfys Deeside have shared their early experiences of running the temporary hospital. 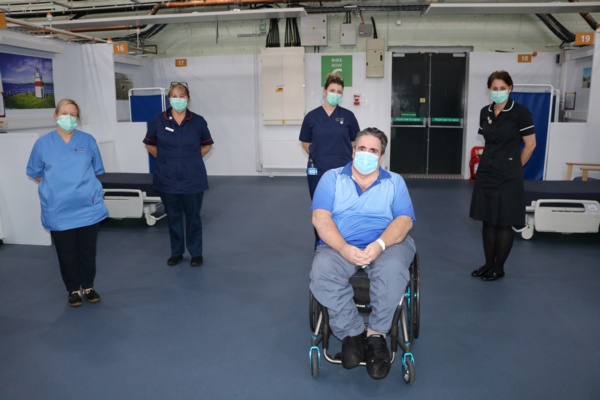 The temporary hospital was set up at the start of the pandemic in April, and welcomed its first patient, 55-year-old Mold resident Arfon Hardy, in early November.

Arfon moved to Enfys Deeside having spent a month at Wrexham Maelor Hospital receiving treatment for both sepsis and COVID-19.

He is one of a number of patients who have been treated in Deeside over the last month, which opened with an initial maximum capacity of 30 patients to help relieve pressure on North Wales’ three acute hospitals.

Thanks to the two-week firebreak in late October, community transmissions of COVID-19 have reduced, also helping reduce pressure on the NHS system across the region.

Dr Abbott, who also works at Wrexham Maelor Hospital, is the Clinical Lead at the temporary hospital said: “The public response to the fire break was really good, and as the rainbow hospitals are really our worst-case scenario, it’s good that we do not have to use them on a big scale at the moment.

“We’re the insurance policy, ready for if something else goes wrong. We're not getting up to big numbers of patients, and we won’t do for a period now, but expect that will change as we get closer to Christmas.

“This time has been really valuable though in allowing us to help take pressure off the general sites a little bit. It has allowed us to test our symptoms, to get our teams together, and scale up the work we did in preparation for opening.

“The patients we’re seeing are people who normally would be able to go home, are on their way to getting home, or are in a community hospital receiving rehabilitation services.

“There are patients who need negative swabs, or need to complete a period of isolation, before returning home or to their care home. 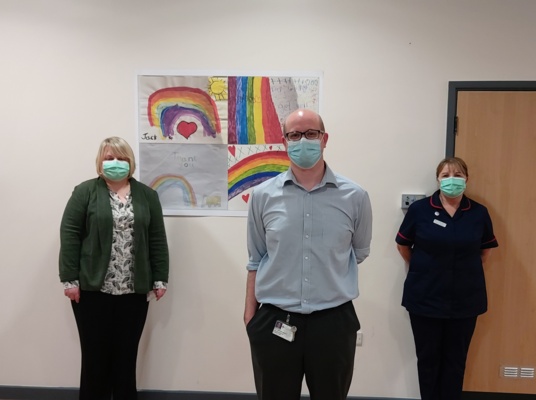 “Some of what our patients need is just time to get better, and some need some rehabilitation, there’s a mix of the two.”

The hospital’s Ward 1 is based in what was Deeside Leisure Centre’s main sports hall, with a total capacity of up to 110 patients.

The vast size of the area used to care for patients had been a worry for the management team, but as Laura Vernon explains, those concerns and worries over noise levels have not yet proved to be a problem.

Laura said: “It's a testament to the planning we've been doing since April that things have gone as smoothly as they have.

“This is not a hospital building and was never set up as such – so we’ve had to amend and adapt how we provide care within a physical space like this.

“Setting up to be ready to care for people on this scale hasn’t been done in the UK for hundreds of years. Wards with 110 beds do not exist anywhere, so using a space like this has challenges you don’t get in a normal hospital.

“One thing we were worried about is the noise level. This is a big open area, and if you imagine playing sport in a sports hall, it can be really noisy with an echo.

“What we’ve been surprised to find though is that it’s actually quite a calm atmosphere. Even though it’s a big space with no windows or natural light, there’s a really homely atmosphere.

“For people living with dementia or confusion, a hospital ward really isn’t the best space, but here it's very calm, very quiet, and any noise seems to go upwards and is lost in the roof space. There's no TVs which might help, and our patients have been using tablets or mobile devices to stay in touch with family and stay entertained.

“We’ve still had some activities to keep everyone mobile and stimulated, including playing some Elvis and 1940s music, but on the whole that’s one big concern we had which just hasn’t been a problem.”

“The lighting which was organised has really helped. It's not the normal ward lighting, which you usually get, it's much more subtle - for people recovering and not feeling well, which is who we’re welcoming, that’s a real help. 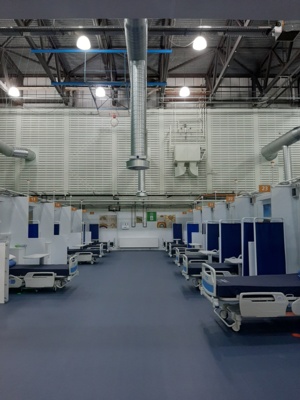 “It's weird to say a sports hall is cosy, but that's really what we've found!”

Kim Scandariato, who before COVID-19 worked within the Mental Health and Learning Disabilities Division, said the multi-disciplinary approach at the hospital, where doctors, nurses and other medical and therapies staff share expertise and skills, was helping patients make the final steps before going home.

Kim said: “The patients who are coming here in many cases had been bedbound, but are now walking, supporting themselves and getting ready to return home.

“We've had a real variety of patients, from people living independently at home to some who need quite dedicated care away from hospital, so the main goal for everything we do is about getting people back to where they want to be.

“To support that, we have a range of therapies staff supporting us, including Occupational therapists, Dietitians, Physiotherapists, Speech and Language Therapy, and manual handling on site, working alongside our doctors and nurses.

“Therapies plays a big part of what we’re doing, and the teamwork we’ve had has been absolutely superb.

“I think everyone will come away from this experience having learned something, ready to bring that experience to post-COVID care.”

“Another challenge we had were around practical problems of working in a new space.

“Things like how do we get people with reduced mobility to the toilets, how do we sort manual handling in the bed space available, how do we appropriately isolate someone if there’s a chance they’re infectious.

“There’s a lot of little practical things which add up to a lot, but nothing has been insurmountable and the time we’ve had has been really valuable in coming up with solutions.

“We’re fortunate that we’ve been able to provide really good care without compromising on quality.

“In fact, I would say this is the most positive experience I’ve had in my career. It’s been a challenge, but a really good one.

“It’s been a brilliant opportunity for our nursing team here. Hopefully they won't have an opportunity to be in a position like this again, but it just gives them something other people just won’t have experienced before.”