Saffron Roberts spent three decades in the grip of addiction and physically abusive relationships, before being given a second chance at life through Betsi Cadwaladr University Health Board’s Moving On In My Recovery programme.

The mum of two is sharing her remarkable story of recovery to give hope to other people struggling with addiction.

Saffron, 40, first started using cannabis, acid and amphetamines at the age of 14, before being introduced to cocaine and crack cocaine. 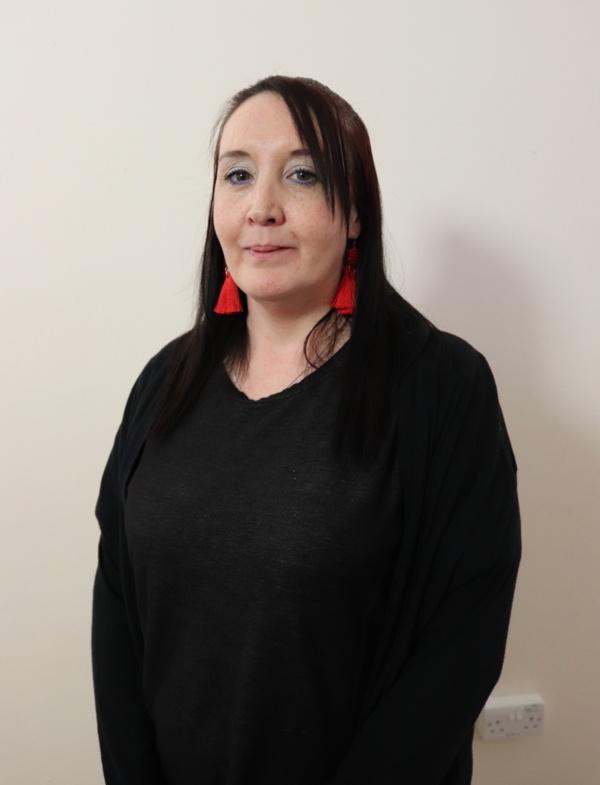 Despite vowing to never use heroin, after her brother died of an overdose at the age of 30, Saffron was introduced to the drug by an abusive partner. Years later, she would lose a second brother to a heroin overdose.

She suffered the anguish of having her two children removed from her care by social services, and endured violent attacks at the hands of her partner and other drug dealers.

“We were living with drug dealers and there would be prolonged violent attacks” she recalls.

“I learnt very quickly to do whatever I was told and keep my mouth shut. The next few years I spent every day injecting drugs, selling drugs, shoplifting, picking up parcels and whatever else I was told to do. We had armed police busts, but if the dealers were caught, there was always others to replace them.

“I’ve had broken ribs, a broken arm and many scars where I’ve been bitten and cut.  I was in constant physical pain and I’d wake up in the night gasping for breath. I’d become completely fine with the idea that the amount of drugs I was taking might kill me.

“I didn’t want to live my life like this and I couldn’t find a way out. I didn’t see my kids, I’d let my family down and missed out on so many Christmases, birthdays and family occasions, including my Taid’s funeral and my brother’s wedding.”

Driven by the ongoing pain of losing her children, Saffron mustered the courage to leave her old life behind and get clean.

“After a particularly bad beating I thought if I die my kids will think I didn’t even try to fight for them. I’d given up on myself, but I didn’t want my kids to think I’d given up on them.

“On the 19th April 2018 I left the flat in Colwyn Bay and my Dad took me to a Women’s Aid refuge, where I was supported by a Domestic Abuse Officer. He called an ambulance and Doctors couldn’t believe I was still breathing.”

In the following months, Saffron was supported by Women’s Aid and Betsi Cadwaladr University Health Board’s substance misuse service, before being referred to Penrhyn House on the outskirts of Bangor, which helps people recover from long term substance misuse.

It was there that she was introduced to Moving On In My Recovery, which has been credited with helping hundreds of people across North Wales achieve a sustained recovery from addiction.

Unlike many traditional programmes, Moving On has been developed with service users based on what worked for them in recovery. It is delivered by people with a lived experience of addiction, alongside staff from BCUHB’s treatment services.

A recent study funded by Alcohol Change UK found that the Moving On In My Recovery programme was effective in helping people achieve a sustained recovery from addiction. The programme was also found to improve people’s confidence, life skills, and ability to address difficulties in their lives, while reducing low mood and anxiety.

“Addiction had destroyed me and I was an empty shell, broken and scared of everything” Saffron recalls.

“I didn’t know who I was or what I liked. I knew nothing about recovery and I’d never been to any meetings or any groups before. But there were people at Penrhyn House who wanted to help me. They laughed a lot and they cared for each other and for me.”

Saffron has now been clean for almost two years and she has learnt to build ‘anchor points’ in her life to help her remain abstinent. These have included repairing her relationship with her children and wider family, as well as attending a creative writing course, boxercise classes and writing poetry.

She also regularly volunteers at Penrhyn House where she helps to facilitate Moving On therapy sessions.

“My addiction was a full time job, so I treat my recovery the same, because without recovery I have nothing,” she explained.

“I’ve started writing to my daughter. She’s 11 now and I’ve not see her since she was 5. I’m working on improving our relationship. I have an amazing relationship with my son and my three brothers.

“I know from Moving On In My Recovery that we can often find healing by contributing to others.

“I want to make sure that the years of dereliction and pain are not wasted by using my story of experience, strength and hope to help someone else get better. Because we can only keep what we have by giving it away.”

Referrals to the Moving On In My Recovery programme can be made through Betsi Cadwaladr University Health Board’s Substance Misuse Service.

**DAN 24/7 is a free and confidential drugs helpline providing a single point of contact for anyone in Wales wanting further information or help relating to drugs or alcohol. Call Freephone 0808 808 2234 or text ‘DAN’ to 81066**