A former Bangor University lecturer is back on his feet and has returned from instructing a mountain leadership course in India following life changing hip surgery last year.

Tim Jepson, 67, from Mynydd Llandygai, first started experiencing stiffness in both of his hips around ten years ago and was later diagnosed with arthritis.

Due to his love of the outdoors, Tim continued rock climbing and cycling but was unable to continue with hillwalking due to the pain in his hips becoming increasingly worse.

He said: “I tried to put off surgery for as long as I could but the pain was starting to get a lot worse and it stopped me from doing certain outdoor activities, such as hillwalking which I very much enjoy.

“I was placed on the waiting list and I received my first hip operation in February 2019 followed by another on my other hip in August the same year.

“I was delighted with the outcome on both occasions and I really appreciate the care I received from my surgeon, Mr Muthu Ganapathi, and his team. 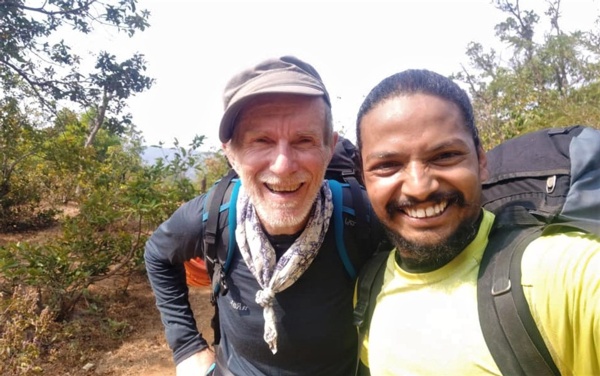 Tim, a former lecturer in Outdoor Education, has recently returned from Mumbai having worked as a trainer on a 10-day Mountain Leadership course for local Indian Trekking Guides in Sahyadri.

“I had deliberately put off doing this for a long period of time but following the surgery I felt confident enough to do this.

“The course involved practical training in the skills of leading treks and included walking, climbing and camping in the mountains.

“My movement is strong and pain free again, I can now travel over rough ground with the same agility that I had when I was 40-years-old!

“I am extremely grateful for this surgery, it has improved my quality of life massively and has enabled me to do the things I love again.

“I would like to thank the surgical team at Ysbyty Gwynedd, as well as the nursing staff on Enlli Ward, and the excellent Physios and Occupational Therapists who helped me back on my feet following my surgery,” added Tim.

Consultant Orthopaedic Surgeon, Mr Ganapathi, has thanked Tim for his kind words and is pleased he is doing well following surgery.

He said: “‘Mr Jepson initially came to see me with pain and stiffness due to severe arthritis in both hips. He had come to a stage where he was not even able to do his day to day activities, let alone outdoor pursuits.

“We had a lengthy discussion about options including hip replacement and whether or not he will be able to pursue his passion for outdoor activities. While high level activity is not usually associated with outcome following hip replacements in the past, with modern surgical techniques and rehabilitation protocols, many patients seem to reach high level of function after hip replacements.

“I am delighted that he has been able to again pursue the outdoor activities which is his passion. It goes without saying that the motivation and positive attitude of Mr Jepson has also played a significant role in achieving this level of functional activity.”