Children wowed by African safaris, a 71-year love affair and a dance with Princess Margaret

Lyn Siebenmann, the unit’s activities and wellbeing coordinator, chaired the discussion during which youngsters quizzed their older counterparts to help them compile a digital record of their experiences.

Once completed, Ffynnon ward patients who took part will get to see the result – and there was plenty for the children’s eager young minds to take in.

Eighty-six year-old Sheila Heffer answered a question about her travel experiences by recounting a trip to South Africa many years ago.

She saw lions, watched a baby elephant tear down a tree and recounted a priceless moment where a giraffe bent down and looked her right in the eye.

“I remember thinking how beautiful those long eyelashes were,” she said. “It made me want to pluck them off and have them for myself.”

Thankfully she just came away with her story, yet the stars of the show were appropriately named Ray and Gladys Valentine, both aged 91 and from Rhuddlan.

Married for 71 years they were happy to recount they were each others’ best friends and still liked to test their mettle with regular card games like crib and canasta – which Gladys normally wins.

Ray who joined the video event to be with his wife, who has been on Ffynnnon ward for around five weeks, said it was love at first sight.

A former drill instructor in the RAF dashing Ray told how he went to a dance one night after the war, admittedly slightly the worse for wear.

He described how he saw Gladys as a “vision in red” on the dancefloor and, after telling his mates he wanted to dance with her, stepped out and won her heart.

They were married on June 3, 1950, near Stockport and the couple told youngsters how they saw the Trooping of the Colour in London on their honeymoon.

Yet Ray, who Gladys described as a “wonderful dancer”, also revealed he took the late Princess Margaret for a whirl across the famous Lyceum ballroom in London.

He explained: “It was a ladies excuse me dance. Princess Margaret came round - we only danced about four steps, then she was off dancing with someone else.

“She was extremely nice and she was a great dancer.”

However Gladys will always be his Valentine, and not just in name, as she revealed caring Ray is a big help around the home.

She said: “I do all the cooking, although I have to take it slowly these days and Ray does most of the work around the house now.” 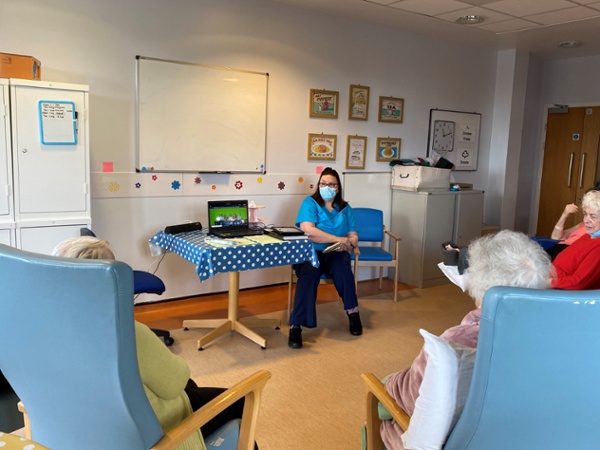 Lyn Siebenmann said she plans to compile a “memory book” of all the stories and add to it with those of other patients who stay on the ward in the future.

The ward is split into two parts, A and B, and can accommodate 44 older patients.

She said: “I have the best job in the world as I get to listen to these wonderful stories all day.

“If we don’t record and celebrate them they will be lost and that’s just a shame. Sometimes these wonderful, experienced personalities are seen as collections of symptoms and illnesses, rather than people.

“I think this is the biggest part of respect and dignity we can give them – hearing their stories and saving them.”